Today is the first day of this year’s “official” 100 day project. I say official because someone is sponsoring it, but really you could start a 100 day project any time; pick a creative thing to do and do it every day for 100 days, preferably while posting about it on social media and using #100dayproject or something similar. A few years ago, I did 100 days of knitting. Last year I opted to do National Poetry Writing Month (write a poem every day in April, National Poetry Writing Month). After waffling about it, this year I’m going to do 100 days of writing. This will be broad enough for me to revive this blog but also get some creative writing in there as well.

Speaking of this blog … I’m going to be moving it from madgeface.wordpress.com to littlegoldennotebook.com so the domain will match my blog name, not my user name. Also, I paid cash money to get rid of ads and have slightly more control over the appearance. I’m not sure if you read my posts in a blog reader or by loading the whole site, but appearance is finally starting to matter to me so adios, ads. I’ve got some design and migration work ahead of me before I start posting from there and hope you will follow me over to the new domain once I’ve got everything set – I’ll try to make it as easy as possible.

In other news, I have decided to hang my freelancing shingle. My husband started a new contract, which means I’ve been working some, too. I’ve been freelancing for Ky’s consulting company a few years now but it’s time to open it up to more people/opportunities since a) I’m doing it anyway and b) I enjoy it, even though I gripe constantly about how awful Microsoft Office is. So be on the lookout for more about that, too.

In other other news, our dog Lily has had an ulcer on her cornea for about a month now. We tried a conservative treatment, but landed at the dog ophthalmologist today. The doctor ground the ulcer (which is a lot like a blister) off her cornea so the healthy cornea tissue can replace the bad. Poor Lil is looking at at least another 2 weeks in her cone, but at least she’s mostly used to it at this point. She’s obviously not comfortable tonight, but I’m hoping this set back will ultimately mean her eye will heal and I can stop making jokes about us still not getting HBO despite our four-legged satellite. 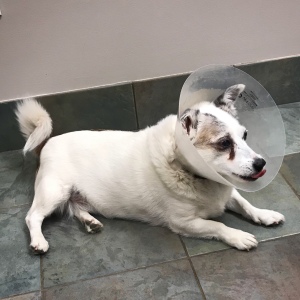